If this ain't road-geeky, I don't know what is. While traveling along Oregon 99W, I noticed they had not used the Oregon Highway Shield on a street sign in Tigard, Oregon. I appreciate that they were trying to give it a classic look, but they used the Interstate Highway shield outline. 99W is not an Interstate Highway, although it was former US Route 99W and some say Alt US 99. 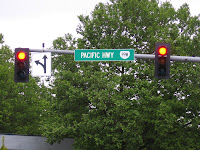 Those poor sign makers always getting picked on by Road Geeks!!
US 99W in Oregon stretched from just south of the Interstate Bridge north of Portland to Junction City, Oregon. 99W and 99E mostly follow the Willamette River Valley. Both ends merged with US 99E and continued as US 99. Oregon 99W is now signed only from downtown Portland to Junction City. You can easily follow the old 99W by crossing the Steel Bridge and then following Interstate Avenue until it merges with I-5 and shortly into Washington State across the Interstate Bridge over the Columbia River. A section of the old 99W through downtown Portland is now the Tom McCall Waterfront Park. This road along the Willamette River was considered a hideous freeway and was not just decommissioned, but totally destructed.
The City of Portland put to good use the former 4 lanes of Interstate Avenue and laid tracks for an expansion of the Max light rail transit system. There is still 2 lanes you can enjoy along with the tracks.
South of the Portland Metro area, 99W travels through scenic rural country, small towns, wine country. I-5 replaced both 99W and 99E with almost a whole new alignment, so 99W is mostly locked in time with at grade crossings, stoplights, and some slow speed limits through towns. While you are enjoying the scenery, look out for the other guy who is probably also distracted by the scenery. Be aware that 99W can be very very slow north of Tigard.
Photos (c) 2008 All the World Travel
Links
99W on Wikipedia
more on the 99W freeway
Books
Historic Highway Bridges of Oregon

Posted by TheRoadGeek.com at 6:07 PM No comments:

I am a Road Geek

I love checking out roads... old roads, new roads, even roads that aren't there any more.
Posted by TheRoadGeek.com at 12:20 PM No comments: