More than just a Bicycle Map 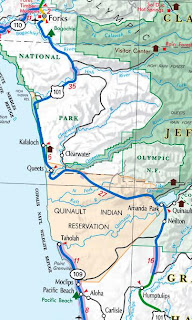 Once in a while you find something road geeky when you least expect it. I was at the library last week and saw a free map. Besides being a Road Geek, I’m also a Map Geek. I think it may be in my genes. During one our family’s mini-semi-irregular-family reunion my Father, Brother and I were in the living room. Our wives were elsewhere. Without prompting from any external or internal sources, all three of us were looking at maps. As usual I digress.

The map was the Washington (State) Bicycle Map 2008. Never being one to turn down a free map, even a map I don’t “need”. After all, I can’t remember the last time I was on a bike. It probably involved minor injuries, which may be why I have blocked it from my memory.

I opened the map and found the usual Washington State map from the Department of Transportation, highlighted with bicycle trail information. It showed the freeway sections closed to bicycles, highways with dangerous narrow shoulders, and the real highlight for this geek… color coded from hot red to cold blue, the highway’s average daily traffic. I’ll admit knowing that up to 2000 cars travel daily on US101 between Forks and Humptulips, Washington probably doesn’t make for exciting conversation. However, for the road geek, or map geek, or maybe even a cyclist… enjoy… but please, wear a helmet.

Posted by TheRoadGeek.com at 10:17 PM No comments: